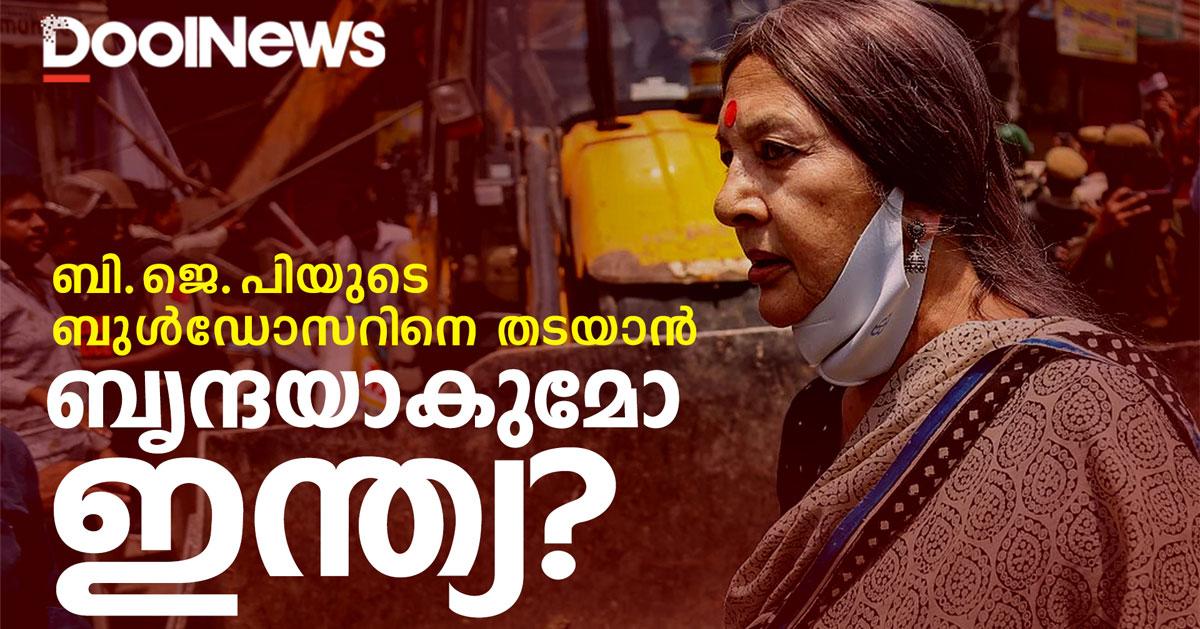 The sight of bulldozers destroying Muslim residences, buildings and shops in Delhi’s Jahangirpuri is now the talk of the country. The BJP-ruled Municipal Corporation carried out the demolition in defiance of even a Supreme Court order. Only Brinda Karat, a CPI (M) politburo member from the opposition, came to the spot and demanded an end to the illegal activities of the Municipal Corporation.

What happened at Jahangirpuri in Delhi? Are these incidents a continuation of the bulldozer raj and JCB raj used by the BJP in Madhya Pradesh and Uttar Pradesh? What was the complaint of the BJP leader in Delhi who was blamed for the demolition? What were the incidents of violence that took place in Jahangirpuri on the last Hanuman Jayanti day? What is the connection between that and today’s demolition? Court proceedings in connection with the demolition? Why is there any protest against the non-arrival of any other opposition party except CPI (M) leader Brinda Karat? Let’s check

Bulldozing at JahangirpuriNine bulldozers reached Jahangirpuri on Wednesday morning. Bulldozers and municipal officials arrived at the scene under heavy police security. Then houses and shops in the area began to be demolished.

Homes and shops were regularly demolished. Locals say they have not received any warning or evacuation notice from the authorities about the demolition. The media and social media are abuzz with scenes of people tearfully saying and begging in front of the JCB not to demolish their buildings.

North Delhi municipal authorities claim that this is a common practice as part of the anti-encroachment drive or illegal land encroachment prevention scheme. However, BJP president Adesh Gupta’s complaint to the NDMC mayor said that the move was not seen as normal. Adesh Gupta’s complaint to the mayor was that the occupied lands of the ‘rebels’ should be found and demolished.

Moreover, in the wake of the recent communal clashes in Jahangirpuri in connection with Hanuman Jayanti, it has been criticized that the move is aimed at oppressing Muslims. The gate of the mosque and the houses and shops of the Muslims adjacent to the mosque were destroyed. No other buildings have been reported to have been demolished.

Authorities decided to begin the demolition on Tuesday. But it was postponed to the next day as it did not get the required police warmth.

Locals, led by the Jamiat-e-Ulema-Hind, approached the Delhi High Court after learning of the demolition without any legal warning. However, the High Court adjourned the case till Wednesday afternoon. And so on
Authorities arrived early Wednesday morning to clear the area. While the proceedings were going on in Jahangirpur, a petition was filed in the Supreme Court and the court ordered that the proceedings be stayed.

Senior advocates Dushyant Dwivedi and Kapil Sibal appeared for Jamiat-e-Ulema Hind. There are now some false claims that the Congress is legally fighting against the demolition move on the pretext that Kapil Sibal was there to defend the case. But Kapil Sibal came to the court only to advocate for Ulama Hindu as a lawyer.

Authorities opposed the protest with all available police forces, special services and the army. ” Supreme Court Chief Justice NV Ramana had directed that the order be handed over to the authorities as soon as possible. The court was set to hear arguments on the petition on Thursday seeking an injunction restraining the demolition and adjourned proceedings until then.

However, Mayor Raj Iqbal Singh said the demolition would continue till the court rules in its favor. The demolition continued for two hours. It was then that all this stopped. No demolition is currently taking place in the area. But many houses, shops and properties have already been demolished.

‘The Supreme Court has ordered that the demolition process be stopped and I am here to enforce that order. The law and the constitution have been leveled through illegal demolition. No one should be allowed to violate the Supreme Court and court orders, ”Brinda said. Brinda Karat also demanded that the people co-operate in maintaining a peaceful atmosphere in the area after the measures were stopped.

Neither the Congress leaders nor the ruling Aam Aadmi Party in Delhi were ready to comment on the demolition at the time of the incident or in the hours that followed. There is widespread protest against this. Rahul Gandhi tweeted some lines saying that the BJP should try to remove the hatred in their hearts.

Critics say the BJP’s fascist rule is being further perpetuated by opposition parties, which remain silent even as the basic rights of the country’s citizens are being eroded and minorities are being subjected to brutal atrocities at the BJP headquarters.

Violence by extremist Hindu groups on Hanuman Jayanti on April 17

The Vishwa Hindu Parishad and Bajrang Dal, extremist Hindutva groups, marched in front of a mosque in Jahangirpuri with the Hanuman Jayanti Jatha. Police say they were not allowed to march or march in front of the mosque.

The procession reached in front of the mosque during the Muslim prayers and chanted Hindu mantras aloud. Following this, the area became tense. Nine people, including a policeman, were reportedly injured in the ensuing violence and stoning.

According to locals, those who came with the Hanuman Jayanti procession had weapons. There were also shots of people in the procession firing. Many of those present at the rally admitted that they were in possession of weapons.

So far, 25 people have been arrested, police said. Residents of Jahangirpur say most of them belong to the Muslim community. Some lawyers have even approached the court, citing police action and arrests targeting only members of a community.

In areas where extremist Hindutva groups have rioted and clashed, the BJP government has taken steps in other states to destroy their homes and property by targeting minorities. It was started by Yogi Adityanath in Uttar Pradesh.

Yogi started this bulldozing by saying that he would smash the illegal assets of criminals. Yogi was later renamed Bulldozer Baba. The BJP was criticized on the same day for branding them as criminals, to suppress critics and protesters, and to wipe out minorities, including their homes, for alleged encroachment.

Similar incidents took place in BJP-ruled Madhya Pradesh. Now the same language can be seen in the complaint of the BJP leader in Delhi. The BJP authorities and authorities are destroying the houses and livelihoods of the minorities in the name of encroachment, which is seen as a continuation of this bulldozer raj.

There is widespread protest against the move in Jahangirpur. The hashtags #Bulldozer and #StopBulldozingMuslimHousse have become a trend on Twitter.

The bulldozing at Jahangirpuri and its aftermath have led to new discussions. Will there be a public outcry in the country against the Jahangirpuri bulldozing, which is a continuation of various levels of planned attacks on minorities from BJP centers? Will the Indian people still object to the rulers taking to the streets in defiance of the Constitution and human rights? The debate is over whether the action of CPI (M) leader Brinda Karat, who stood by the Supreme Court verdict in front of the bulldozers, will force the Sangh Parivar and other opposition parties to take to the streets and face fascism. The answer will be known in the coming days.