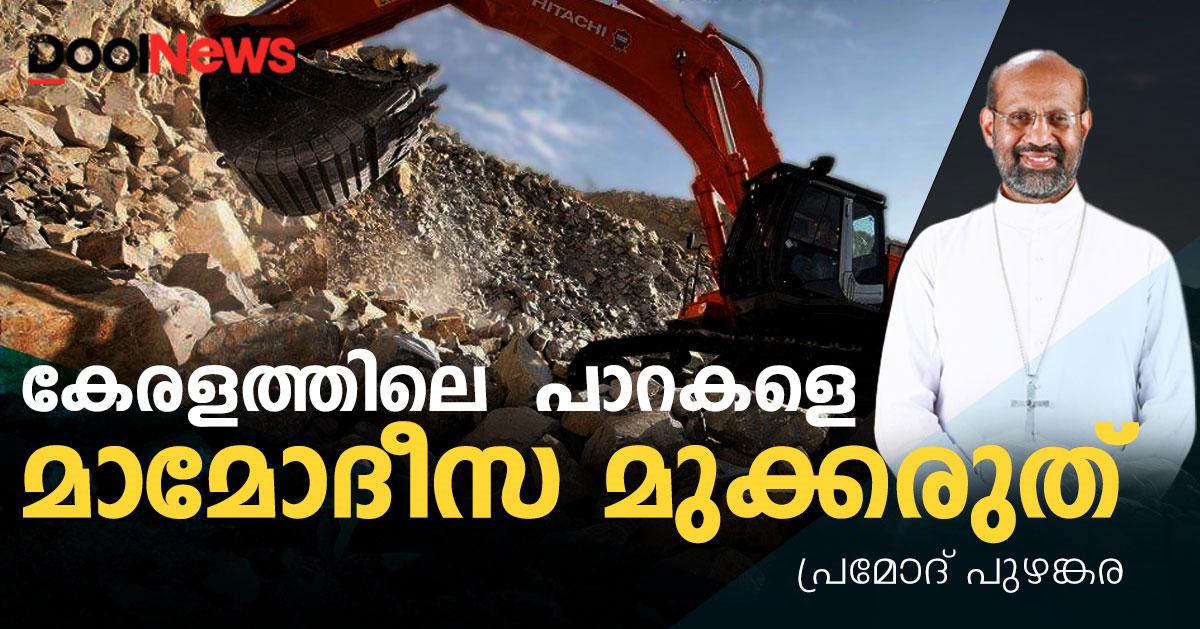 Do not baptize the rocks of Kerala

According to the bishop, the rock was used to build a church and a school. It is no wonder that the Church, the public propagandist and preacher of Christian sectarianism, has taken over the wholesale business of Paramatman. But if a religious group that is supposed to be involved in the realm of faith turns out to be the Rocky Mafia, you will have to go through the motions to discuss it and see the news.

‘Peter, you are a rock. I will build my church on this rock. ‘

The Christian church is not Christ. The church knows that a church can be built not only on rock but also on sand and that an NRI seat is needed in a medical college to protect the faith. and so To be a bishop means to be the smartest businessman in Kerala.

The government has demanded a fine of Rs 23,53,013 from Thamarassery Bishop Paul Inchanani and Pushpagiri Cherupushpam Church vicar Mathew Thakkadi. The fine is for selling rocks to the government. The government decided to impose the fine as per the High Court order.

Not environmentalists anyway An organization called the Catholic Laymen’s Association went to court to expose the fraud. So there is relief. Or the various parties of Syro Malabar Paramada would have come down with emotional lamentations and anger for the protection of the faith and the protection of Paramada.

According to the bishop, the rock was used to build a church and a school. Aha! Bishop of Thamarassery, you are a rock. It is not said that the canon law applies to the masonry of the church.

In any case, the business of faith protection of the Diocese of Thamarassery has not yet begun. The Diocese of Thamarassery has always stood firm like a rock against unbelievers and idolaters and wielded the sword of faith. When the Gadgil Committee report came out, it was the eminent scholars who showed the ingenuity to burn down the office of the Forest Department.

They have a history of standing up for fake propaganda in Kerala in the name of Gadgil and the birthright to encroach on hundreds of acres in its name. It is now clear what the real problem was for the church leaders who shouted that the poor peasants should be evicted when the Gadgil report came out. There is little stone trade, which is blessed by the Lord. Is the constitutional force of minority rights. Do not touch! That’s fair!

The church has also come forward with the ‘love jihad’ allegation that Christian girls are being abducted by Muslim youths under the guise of love. The anti-love jihad march was organized under the Thamarassery diocese by nuns who harassed the famous Marxist George Thomas. It was here that the Church, which had tolerated the death of Matthew Chacko, a Marxist, came in with a ticket to heaven and prayed and played a play.

That’s it No wonder they are public propagandists and preachers of Christian sectarianism who take over the wholesale business of stone masonry. The trade opportunities that sectarianism opens up are endless. It is now becoming clear which church the Catholic Church is fighting for. Christian churches are the most dangerous form of communalism in Kerala society. Its screaming six was seen on topics including love jihad.

But the Christian Churches in Kerala had created a social atmosphere in which the community naturally accepted every such Christian religious event. That is how the art of the parish priest and the Moilyar clown character came about.

Christian churches, which from time to time sell at a profit a mixture of religion, including aggression, trade, and communalism, may no longer have a secure social climate. Because people are realizing the ulterior motives of the worst and most dangerous communal propaganda in Kerala, including the Love Jihad campaign agenda.

If a member of the state secretariat of the ruling party in Kerala gets this to pay the fine by stoning him, that will be the whole discussion of the next day. But If a religious group that is supposed to be involved in the realm of faith turns out to be the Rocky Mafia, you will have to go through the motions to discuss it and see the news. That is the strength of the Christian Churches in Kerala, which have become a mafia group of various trades in the name of faith.

Thamarassery Bishop and the false priests have no objection to the construction of the church. But the problem is that it threatens to circumvent all the laws of Kerala and to circumvent those who are not by the Christian faith. Do not baptize the rocks of Kerala.