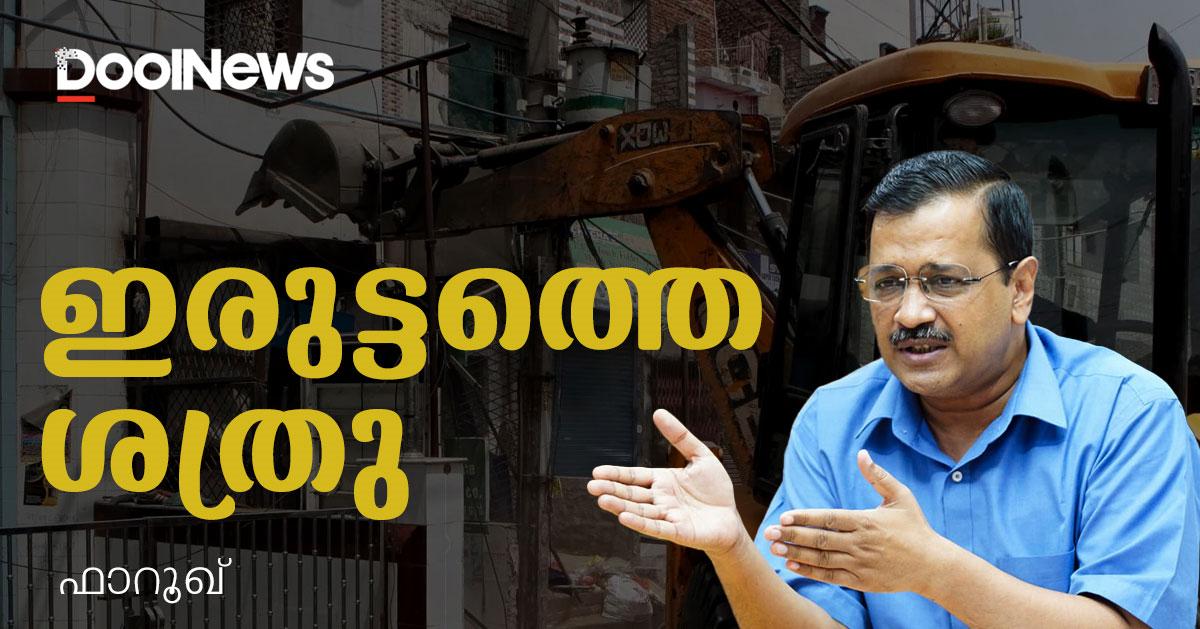 
The enemy of darkness

Yet why are Kejriwal’s spokespersons blaming the BJP for the Bangladeshis and Rohingyas? That’s ‘dog whistling’. When the AAP says Bangladeshis and Rohingyas, those who need to be heard are Muslims. If you can not hear it then it is because your ear is still a human ear, congratulations. The AAP blames the BJP for being incompetent fascists. Eight years after you came to power, the AAP’s question is whether you have ever been able to open a gas chamber. Those who need to hear can hear it. Clearly, loud.

The Indians, who had complained that only sad faces could be seen after the plague, saw a face glowing with joy yesterday. Anjana Om Kashyap. Senior Editor, India Today Group. The face of the Aaj Tak channel.

The main anchors go out and report live only when there are events that are most likely to have an audience. Therefore, all the presenters of the channels were in Jahangirpuri yesterday.

This year, when the IPL is the least crowded, it is just a pastime for Indians to watch. The pity of Muslims. Beating them, hoisting the flag over their church, and stripping the heads off their girls’ heads. No one is watching the IPL this year because they have to watch something new every day.

Jahangir was all over Puri. Everything Indian TV viewers can enjoy on the couch sipping popcorn or drinking coffee. Children trying to pick up spoiled food, policemen beating them, women crying loudly, old men crying near crumbling walls, Above all, the bulldozer is the new symbol of Indian nationalism.

For the Indian middle class, which has reached the abyss of moral bankruptcy, there is no greater joy than to see this celebration of begging the poor and making fellow human beings refugees. Who knows better than journalists who know the pulse of the people. Therefore The most valuable presenters arrived in Jahangirpuri. Anjana Om Kashyap was their biggest star.

Anjana knows what the audience wants and does not want. The Indian audience could not bear the slightest hint of grief, the slightest interruption in the sound, as the bulldozers climbed over the houses of the homeless. All they want is unmixed happiness, joy, bursting into laughter. Television presenters are representative of an audience that cannot directly participate in the celebration of begging the poor.

Every presenter knows that. Dressed in designer clothes worth millions, wearing polished and polished shoes, they came in droves, grinning and whitening their teeth with whitener. To the world of the poor who are going to be beggars. Beautiful and handsome. Anjana Om Kashyap was the star of the group.

If you have never shot one you owe it to yourself to give it a try. Anjana was jumping with joy. An eyewitness account of the demolition of houses and churches At one point they got on top of the bulldozer and asked the driver if I could run.

The driver was told that only the roof of a juice shop had been demolished and that he had forgotten to demolish the wall. Like a commentator enticing the audience with his old batsman’s run rate, he was describing how a bulldozer can demolish a house in an hour. Navika Kumar, presenter of Times Now, a channel of the Times of India Group, was concerned that there would be enough bulldozers in India or that they would have to be imported.

When the Nazis realized that it was impractical to kill one by one, they decided that the Jews could no longer be massacred by poisoning them in gas chambers. There was a newspaper that was worried that this would be the only gas available in Germany – Volkshire Biobacher.

The genocide was over, the concentration camps were closed, and Berlin was reduced to ashes. After Hitler committed suicide, journalists who sang praises to the Nazis, among others, were tried in Nuremberg. Alfred Rosenberg was the editor of the Volkshire Biobacher. He was found guilty at the Nuremberg Trial and hanged on October 16, 1946.

I just said it in the crowd.

This is not the time to waste time discussing media ethics. Humans have even bigger problems. Let them copy the evidence against themselves. There was evidence against a handful of journalists, including Alfred Rosenberg and Julius Treacher. Only three or four of the Rwandan radio presenters who fueled the Rwandan massacre that killed eight million people were later convicted.

As long as India has a Nuremberg trial, there will be no shortage of evidence. Evidence is being gathered all over the internet. Let’s stop taking classes on journalism and wait for the trial. Evidence should be on YouTube itself. Because now no one who eats popcorn in the shadow of his own privilege and watches misery on television can testify.

The German Christians, who had witnessed the Jews dragging their neighbors into the gas chambers, said, after all, that they knew nothing. Even Hitler’s own stenographer said so. But time did not leave them alone.

The Germans who survived the war, dying of despair, shame and depression, unable to face their own grandchildren in old age and unable to face their question of what you were doing. Empathy – Compassion is one of the basic human qualities. Psychopaths are those who do not have it. They can never live happily.

On that day celebrated by the Indians, very few people were asking about the ruling party in Delhi, its leader and the Chief Minister of Delhi. There are still a lot of people in India, nothing more, who think leaders need direction.

There were many who expected Kejriwal to have a little more morality than the professional politicians of modern India, who counted the votes on the basis of religion and caste in the excel sheet and looked at the numbers that are becoming apparent in the formula of how many votes can be added and how many votes can be deducted. Especially the Muslims who voted for Kejriwal en masse.

He did nothing and said nothing. But his spokesmen arrived on Rwandan radio in the evening. Atishi Marlena and Raghav Chadha. What they did was dog whistling. Before saying this, a word or two about these two spokespersons.

Will the Delhiites, who breathe only the air of hatred and kill 3,000 Sikhs in three nights, vote for the Christian whom Golwalkar points to as their second enemy? The AAP decided to face this campaign with courage. The Christian part was removed from Atishi’s name. And so on Atishi holds the record for being the only leader to change his name to win an election.

AAP’s main dog whistler is Raghav Chadha, who walks the ramps of a fashion show, appears on television in designer clothes and speaks fluent English. If Raghav Chadha says two sentences, one of them will be Dog Whistle. It was seen during the Punjab elections.

Do you know what a dog whistle is? Let’s say.

The human ear can only hear sound up to 20 kHz. The dog can hear up to 45 kHz. If a sound is made above 20 kHz and below 45 kHz, only dogs can hear it and humans can not. There is a kind of whistle that makes such a noise, the dog whistle. Saipans who go for a walk with the dog will blow this whistle to call the dog, only the dog will hear and humans will not hear.

Atishi and Raghav Chadha said the same thing in chiseled language. The BJP is fully responsible for these problems. OK. The next sentence is an explanation of how they are responsible. They allowed Bangladeshis and Rohingyas to live in different places. That is their mistake. How are you?

Do you understand where the dog whistling is? There is no need for a Bangladeshi to immigrate to India now. They have higher per capita income and employment than India. Bangladeshis are at the forefront of all human resource parameters, including health, education and access to nutrition.

Indians themselves are on the verge of immigration somewhere. Recently, an entire Indian family died of frostbite as they tried to infiltrate Canada through the icy border. If you tell any Bangladeshi you see abroad about immigrating to India, they will laugh and die for two days.

In all, there are 40,000 Rohingya in India. More and more Christian refugees have recently fled Burma to India. 40,000 but not among 130 crore people. A railway station in Delhi can be overcrowded.

The AAP blames the BJP for being incompetent fascists. It has been eight years since you came to power. Have you ever been able to open a gas chamber? That is the question of the AAP. Those who need to hear can hear it. Clearly, loud.

Valkyrie: AAP has started making money in Kerala again. Advertising has resumed in all the newspapers. Suddenly there is a lot of talk about AAP on the top channels, it’s a paid discussion. The whole of India spends money on corruption in Delhi.

All the Rajya Sabha seats were auctioned off to money launderers. I am happy that the money is coming to Kerala. If a Malayalee who is bored of voting for the Congress and the CPI (M) wants a change, who does not like a change? Do not vote for AAP, do for BJP. The enemy of darkness is more dangerous than the enemy of light.

Content Highlight: Farooq about BJP’s Bulldozer act in Jahangirpuri, how media presented it and Aam Aadmi Party’s reaction on it


Works as a Data Security Consultant. Traveler. In the workshop of a historical novel